This documentary series from Oscar-nominated, Emmy-winning directors Jehane Noujaim and Karim Amer (The Square, Control Room, The Vow) follows members who joined the self-improvement group NXIVM – whose leader was convicted of sex trafficking, racketeering conspiracy, and other crimes – to reveal the emotional toll of unfolding events on these individuals.

Set against the backdrop of the federal trial of The United States against Keith Raniere, The Vow, Part Two offers a rare view into Raniere’s innermost circle, including NXIVM co-founder Nancy Salzman. It follows the legal and emotional journeys of the group’s founders, supporters, and defectors as new evidence and stunning revelations come to light, while federal prosecutors and defense attorneys engage in a trial in the national spotlight.

Five years after Keith Raniere’s arrest in Mexico, amid rumors of a secret sex sorority within his self-help company NXIVM, The Vow, Part Two reveals the manifold ways that Raniere and a trusted inner circle of acolytes conspired to induct women into a female only sect called DOS, a name derived from a Latin acronym meaning “Master of Obedient Women.” Including illuminating footage from within NXIVM and chilling testimony from the trial, The Vow, Part Two goes beyond the headlines to delve deeply into the nature of psychological manipulation.

The series hears from staunch defenders of the work that Raniere and Nancy Salzman spearheaded with their Executive Success Programs. Featuring exclusive phone interviews with Keith Raniere from prison and extensive access to Nancy Salzman, who examines her role in the rise of NXIVM, her relationship with Raniere and ultimately wrestles with her involvement in growing an organization that was accused of fostering predatory behavior and criminal activity. 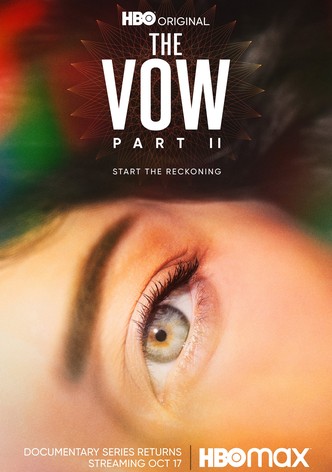